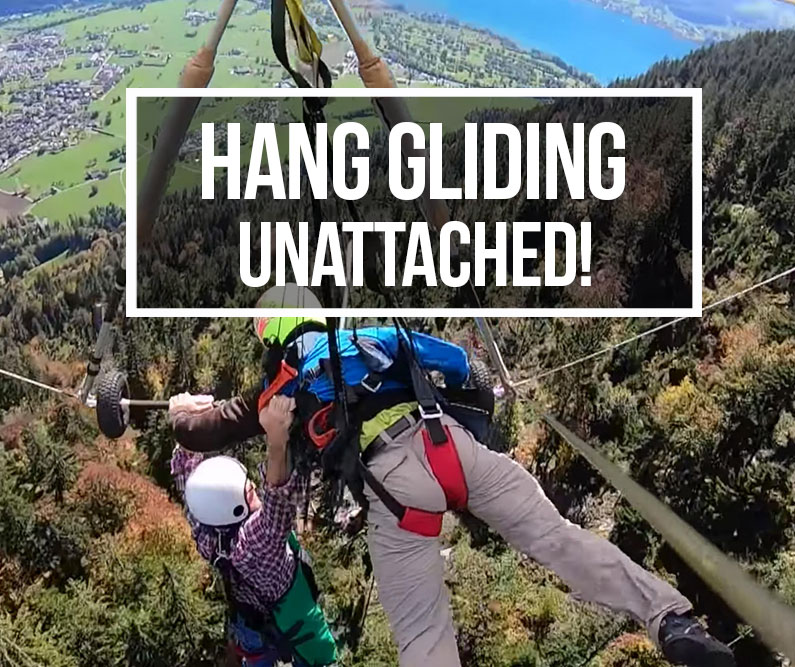 An American tourist has had a horrifying experience when launched on his first hang gliding flight, without being attached to the glider’s frame!

The incident took place in the Swiss Alps a couple of months ago but became known recently, when the protagonist of this nearly fatal flight uploaded a video showing his desperate efforts to hold on as the glider took flight.

Clinging onto his pilot and glider with his bare hands for two minutes, for obvious reasons, it rapidly went viral.

Hang gliding is considered by many the closest man can get to  genuine flight.

Your body, attached with harnesses to this light, foot-launched aircraft, is fully exposed to the wind, allowing you to soar like a bird hundreds or even thousands of feet above the ground.

Nothing blocks your peripheral vision and, most importantly, nothing is heard apart from the sound of your body gashing through the air – no engine, no motor.

Most hang gliders are now made of aluminium alloys or composite frames, with a synthetic sailcloth serving as wing.

The pilot is suspended from the air-frame, controlling his or her course by skilfully shifting his/her body weight, while keeping his/her hands firmly on the triangular control bar upfront.

Explore the world from above

Its ingenious design and light-weight features keep the hang glider up on the air for a significant amount of time – sometimes even hours – depending on the pilot’s skill and experience, as well as the weather conditions.

Seasoned hang gliders cover great distances and can even perform impressive aerobatics. Strict regulations and constant supervision have made hang gliding safer and more popular than ever.

Still, human error and overconfidence can cause problems with any activity.

This is precisely what happened in the case of Chris Gursky, a vehicle parts manager and photographer from Florida.

Whilst enjoying his holiday to Switzerland and having heard so much about hang-gliding, he decided to try it along with his wife, Gail.

Two experienced pilots took them to a 4,000-feet high plateau. Gail took off first, smoothly gaining altitude and enjoying her flight. Then, Chris and his pilot lined up for take-off, waiting a few seconds for the up-draft to soar.

Soon the pilot decided it was time to launch; he said “Three, two, one, go!” and they both run off the edge.

As soon as their feet left the ground, all hell broke loose.

Instead of gradually levelling out above the pilot as he expected, Gursky discovered in terror that the harness on his back wasn’t attached to the hang glider! 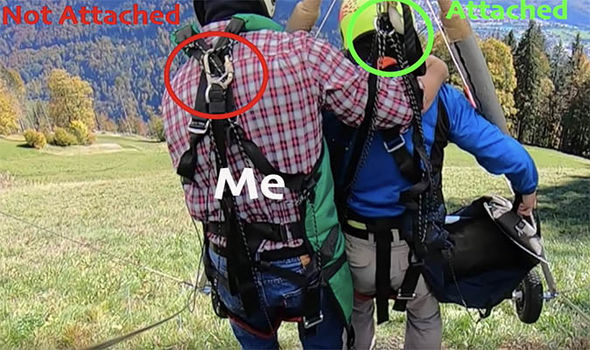 The pilot forgot to attach Mr Gursky to the craft (Image: YOUTUBE/CHRIS GURSKY)

A desperate struggle for his life ensued, which you can watch in the video he recently posted on YouTube under the (moderate) title “Swiss Mishap”.

As you can see in the video, the pilot immediately understands the problem and tries to land as soon as possible, but the weight of Gursky, who clung on with one hand on his shoulder and the other one at the right side of the control bar, made that extremely difficult.

Forced to remain high and regain control of the glider, the pilot struggles to help Gursky with his left hand while flying over a steep wooded hillside. 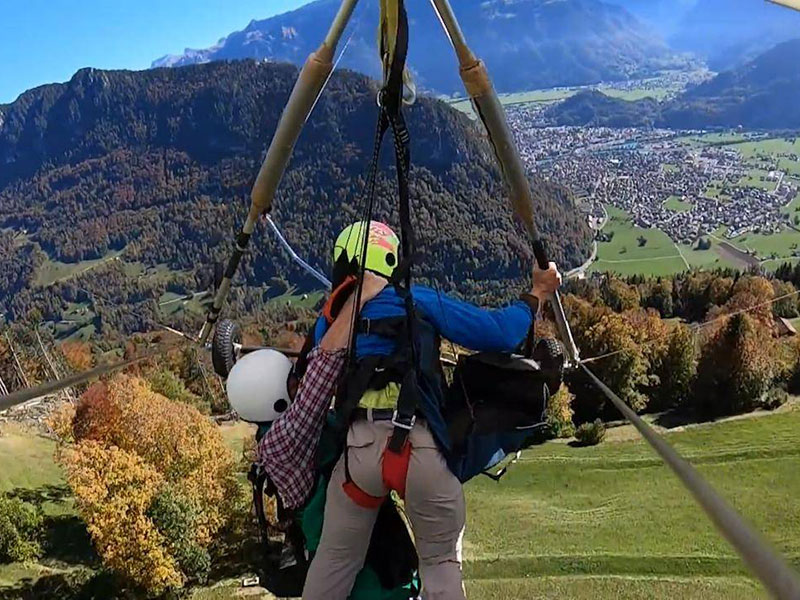 As the glider goes higher, the risk grows

Moments later, Gursky loses grip of the pilot’s shoulder and grabs another strap on his left side, only to see his hand slip off seconds later.

Having no alternative, he grabbed the pilot’s trousers right below the knee, with his body now dangling in a vertical position; at a speed of more than 45 mph! 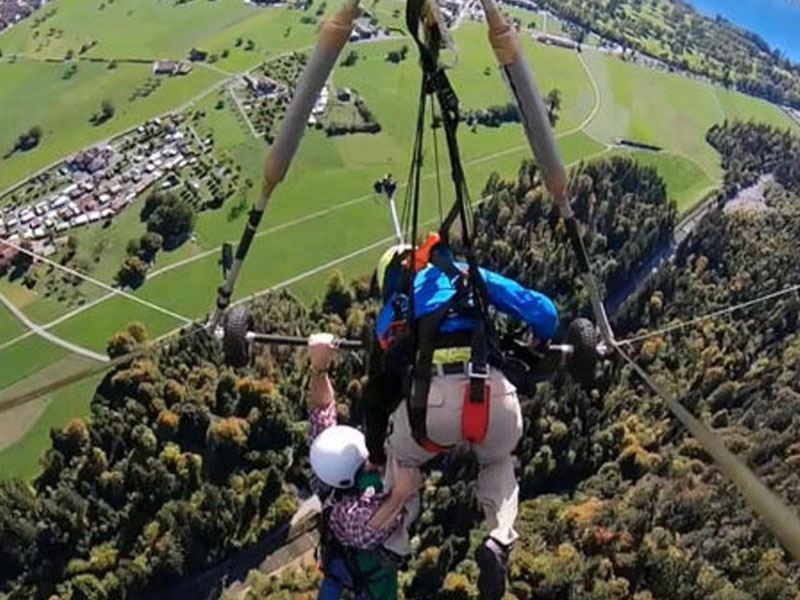 The pilot tries to keep the glider under control

In the meantime, Gail watches her husband’s flight but is not exactly sure what had gone wrong.

As Gursky later stated, the video of his “mishap” is still very disturbing to her.

Eventually, after almost 90 seconds in mid-air, the pilot managed to balance the glider and find a grass field proper for landing.

Still, as they neared the ground, the hang glider’s velocity could easily cause Gursky some serious injuries. After an intense two-minute flight they get close enough to the ground so that Mr Gursky can let go.

The moment his feet touched the ground, the violent shock and vibration made him lose his grip on the control bar.

Mr Gursky later found out he had fractured his wrist and tore his left biceps tendon – minor injuries if you consider the speed by which he hit the ground.

Fortunately, the verdant terrain softened his tumbling. Of the injuries he suffered, Mr Gursky said: “it beats the alternative”.

Gursky regaled his followers on Facebook with the description of his terrifying experience and reassured them he bears no grudge on the pilot, whom he described as “a good guy”, who “did all he could and more.” 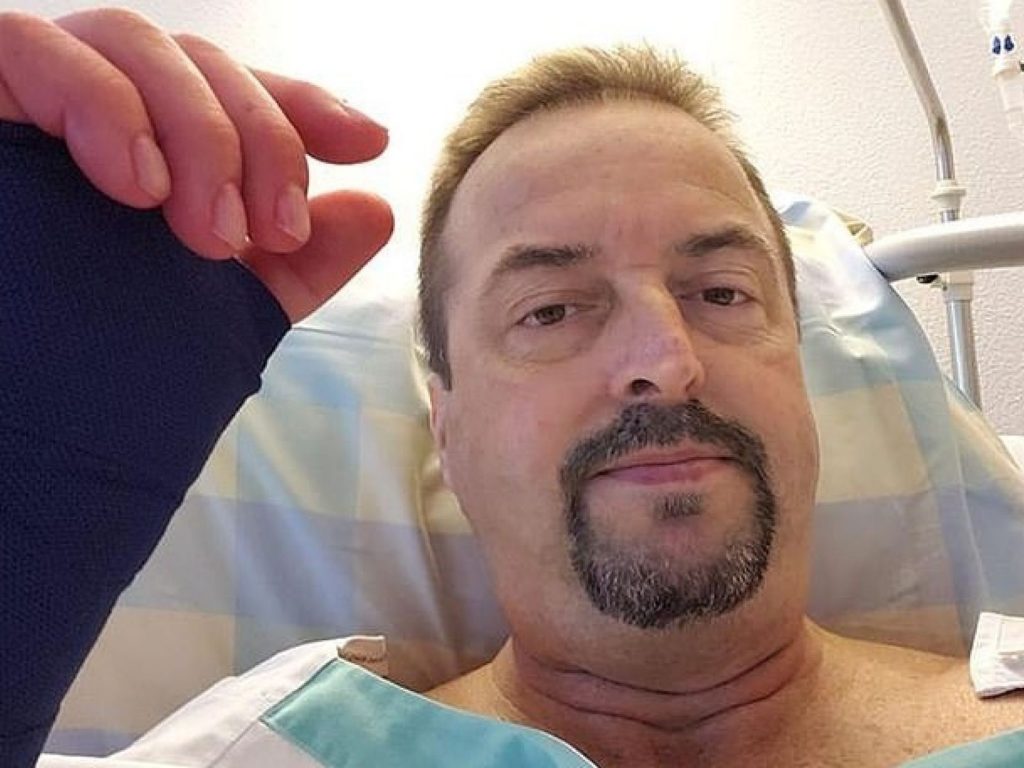 Mr Gursky was left with a fractured his wrist Pic: Chris Gursky/Facebook

He further stated his resolve to hang glide again, successfully this time!

Still, Swiss authorities did not take the matter lightly.

Switzerland’s civil aviation authority started an investigation to ascertain what exactly happened and what went wrong, and thus make sure no such incident ever take place again.