July 8th was undeniably an interesting day for the people working in The Shard, the 310-metre skyscraper towering above Southwark, London, and one of the tallest buildings in Europe.

Early in the morning, at about 5.15 am, a man was spotted climbing the tower using nothing but his hands and feet.

He managed to reach to the top, but the police were already notified and apprehended him, eventually letting him go without pressing charges.

This last free climbing attempt was the last in a series of similar ascents.

But “Why The Shard?”

The Shard – A Daredevil Magnet

Despite its relatively short life – it was inaugurated on July 2012 – The Shard has turned into a daredevil magnet.

Also known as the ‘Shard of Glass’ due to its stunning glass coating, the building stands 309.6 metres (1,016 feet) above ground, ranking as the tallest building across the United Kingdom and Europe.

It is quite understandable why this impressive construction attracts the attention of climbers and adrenaline-addicts.

Anything officially designated as ‘the highest’, the ‘tallest’ or something similar instantly makes it a target, since its scaling (or even an unsuccessful attempt) draws media attention and thousands of likes and followers.

The Shard’s dethronement as Europe’s tallest building is already at hand.

It will soon lose its ‘tallest European building’ designation to the Hermitage Plaza building, which is under construction in Paris and will reach, upon completion within the year, a height of 323 metres.

That means that whoever wishes to take a shot at it before it takes the second place must do it now.

Attempts started even before the completion of its construction.

In December 2011, a group known as the Place Hackers, whose idea of having fun involved trespassing high-security facilities, evaded security, sneaked to the top of the building site and climbed one of the tallest cranes, posting photos of London’s skyline on the social media. 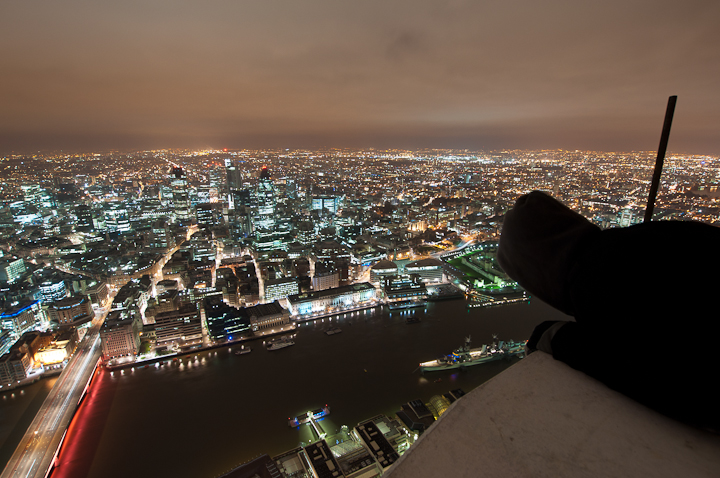 Several similar attempts followed the next months, including numerous BASE jumps, the last of which took place on March 2016.

While most of these stunts were done without the permission of The Shard’s owner’s, on September 2012, Prince Andrew, Duke of York, along with 40 companions took permission to abseil from the tower’s 87th floor as part of a fund-raising.

Free climbers would soon follow – save the whole permission chores.

In November 2012, the famed French urban climber Alain Robert was spotted around the building by staff members. The owners quickly discerned his intentions and took legal action.

Within days, Alain Robert was prevented by a high court injunction from ever attempting to scale the building. 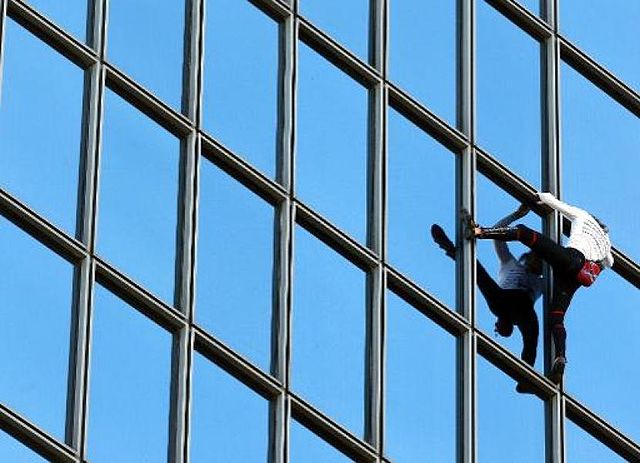 Eight months later nothing could prevent ardent Greenpeace supporters, all women, climbing The Shard to attract attention in their protests against Shell and other oil companies drilling in the Arctic for oil

They completed the climb in 16 hours.

Staff members provided guidance and help to the climbers during their ascent to make sure they would complete their feat without getting hurt.

As soon as they reached the top, all climbers were immediately arrested by the police.

In 2017 the famed YouTuber CassOnline followed.

Craving for popularity and upping his channel’s views and likes, he managed to successfully climb from the public viewing platform to the apex.

Such incidents cause a great deal of anxiety to the owners and employees working in the building.

Aside from the distraction due to media coverage and people swarming around the building, the staff is often obliged to close down the tower’s observatory and several areas around the base of The Shard as a safety precaution against grave injuries not just for the climbers, but to bystanders and employees too.

This is why The Shard’s owners strive to prevent such exploits, often by resorting to legal action.

The attempt on July 8th was perpetrated by teenage climber George King, a man who was obviously a genuine adrenaline-addict in seek of new thrills.

Onlookers posted footage of him making most of the scaling without the use of ropes or suction cups. 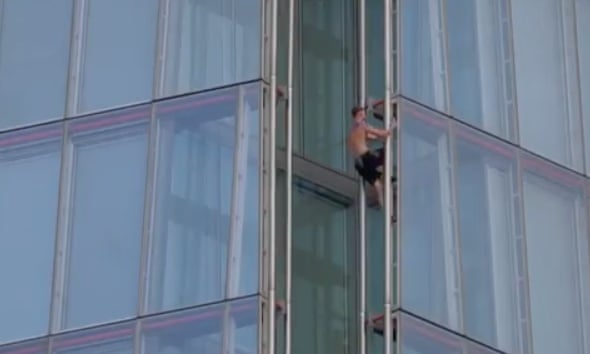 The Shard’s managers later stressed to the press that their main concern is “public safety and the security of the people who live, work and visit The Shard and the surrounding area,” and that they are determined to assist the police and prevent “dangerous activity” of this sort in the future.