It seems hell is not much of an issue for some people!

Defying scorching temperatures, he abseils into active volcanoes and has even camped overnight inside the crater.

He has managed to capture some truly stunning images of our planet’s unceasing volcanic activity. 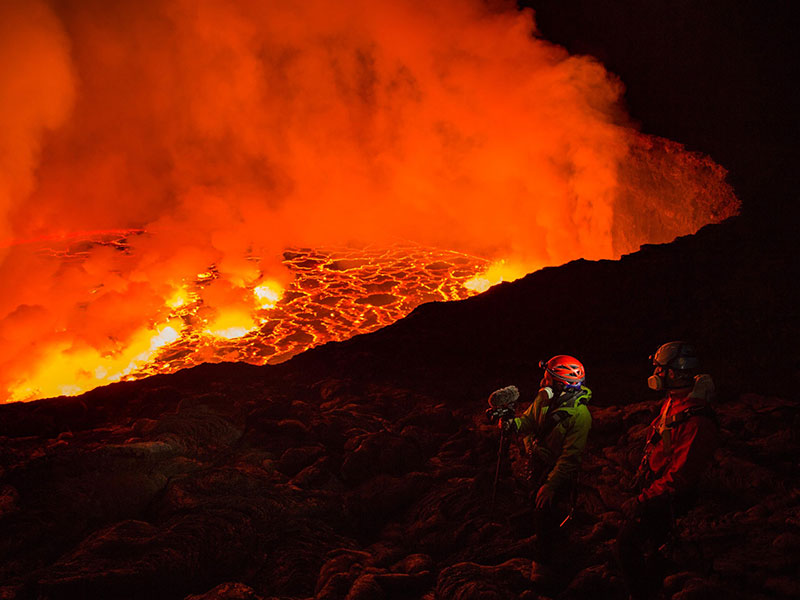 Who is Christopher Horsley?

British adventurer Christopher Horsley was born in 1992 in Ormskirk, a small town in West Lancashire.

The turning point in his life was when he joined the Air Force cadets as a teenager. It was then that he realised his passion for outdoor adventure and in particular, climbing.

Despite being young, he has already built up a reputation for capturing some the planet’s most elusive phenomena and documenting remote cultures. 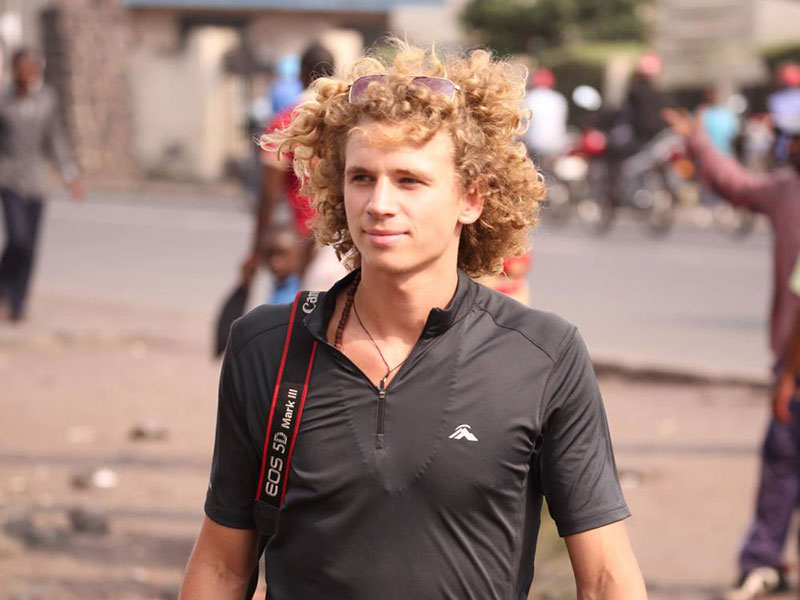 Fascinated by the simple life of Polynesian tribes, he spent several months in Papua New Guinea in 2015, living amongst the locals.

He described his stay there as being “adopted by a tribe”, as he was treated as one of their own during his time in Polynesia.

He used the time to has steadily pushed the limits of travel volcano climbing.

Benbow would mark the climax of his adventures to-date.

The Benbow and Marum Craters

Mountain Benbow and Marum are two volcanic cones of a massive, 1900-year-old caldera (a volcanic feature formed by the collapse of a volcano into itself), which stretches for more than 7.5 miles.

They form part of Ambrym, an island-volcano in the archipelago of Vanuatu, and the fifth largest island in the country.

The island itself is magnificent, covered in thick jungle and surrounded by deep blue water. 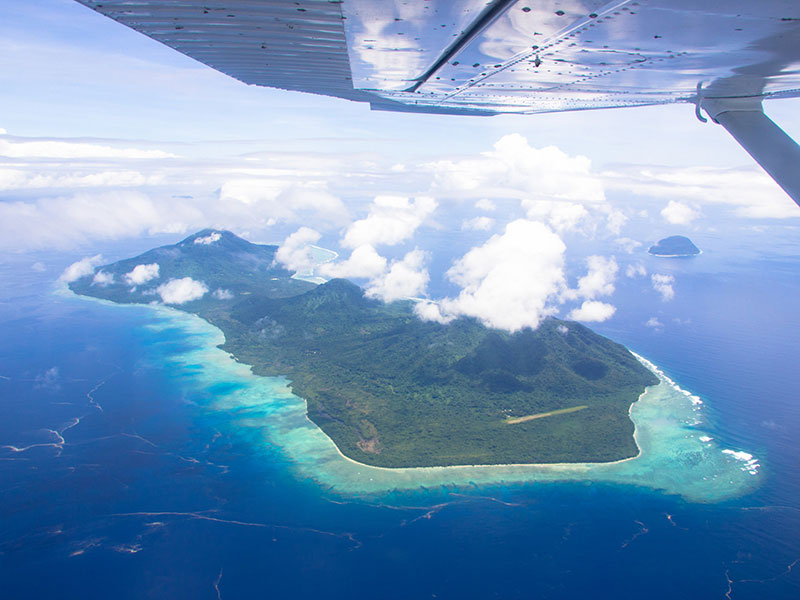 Built by ejected pyroclastic materials around one of Ambrym’s volcanic vents, Benbow has shaped an imposing crater.

Named after an English Admiral by the legendary Captain Cook during one of his ventures in the South Pacific; Benbow is part of a vast volcanic arc in the area, and one of the worlds most active volcanoes.

There are lava lakes quite close to the summit, which emit dangerous gasses.

During the last 120 years, the Ambrym region has experienced several destructive eruptions. Benbow’s last was in 1913, forcing the residents to evacuate the island.

Temperatures on surface of the crater can reach 700o C.

Working as an expedition leader and photographer for Ultimate Volcano Expeditions, Horsley’s plan was to pioneer new ways to access erupting volcanoes safely.

After months of preparation and careful planning, he decided to access all three major craters on the island (Benbow, Marum and Ambrym) – a feat never attempted before.

Despite the terrifying nature of his venture, he was confident he would be safe, thanks to his elaborate rope techniques, sturdy tension lines and equipment specially designed for harsh environments. 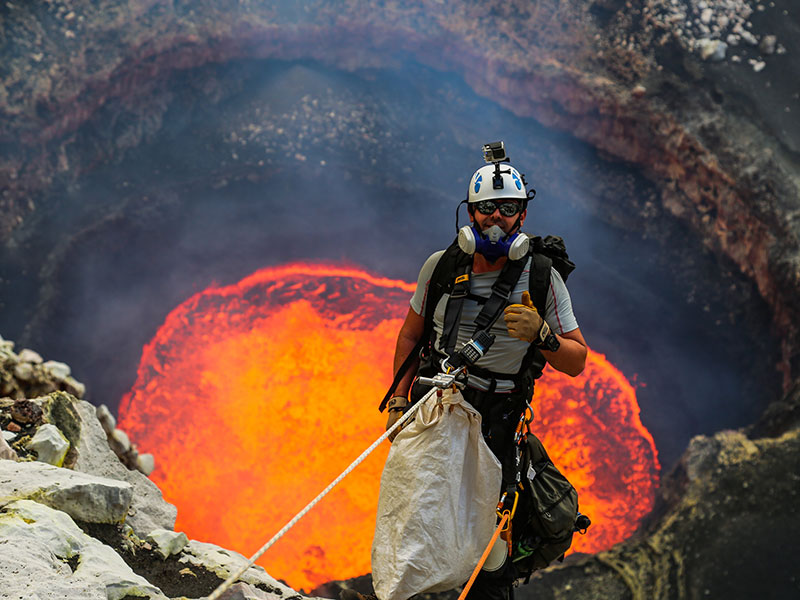 Preparations included several expeditions and strenuous descents and ascents (that usually lasted four to five hours) in and out of the craters to familiarise with the environment.

Camping Inside the Craters

In October 2016, after three expeditions to Ambrym and 14 successful descents into Marum, Horsley felt ready to take it to the next level.

He decided to descend and camp overnight within the crater and over the lava lake Marum with three other seasoned climbers.

They wanted to spend a night on the crater floor, capturing images with the help of a drone.

Setting up a camp in an active volcano, surrounded by 450-metre high rock faces and hanging over a 70-metre wide lava lake proved challenging.

But it was being attempted for the first time in human history! 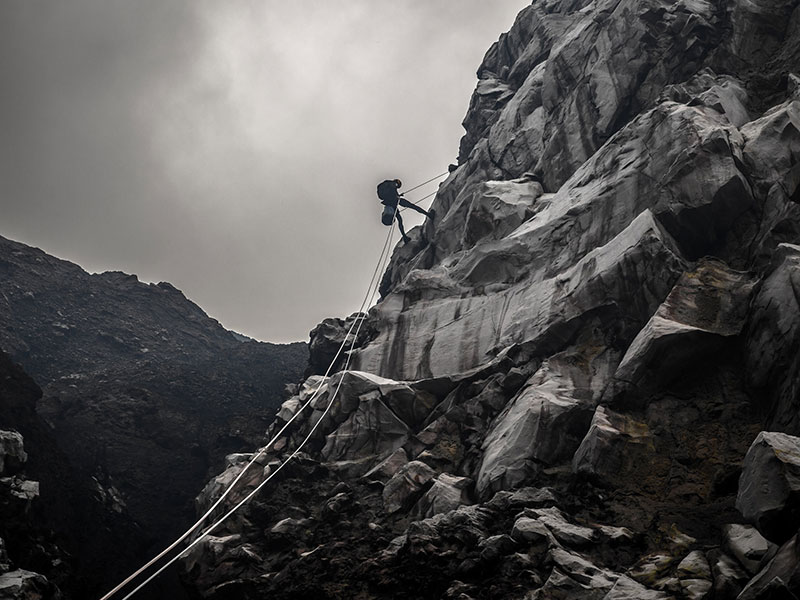 He managed to descend into this 700oC inferno, and take some of the most spectacular pictures of nature’s inner rage. 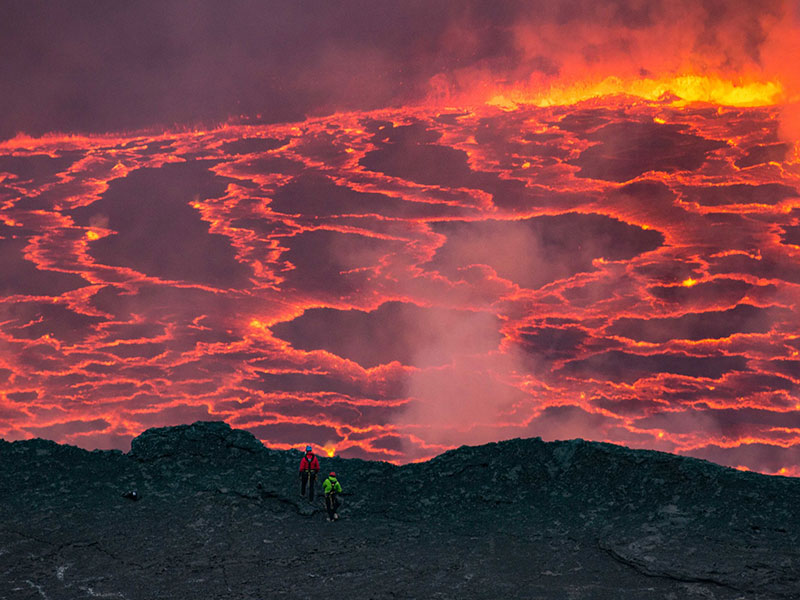 Horsley’s wondrous achievements have widened the horizons of daredevils who are willing to take unprecedented risks in order to reveal hidden gems of beauty on our wonderful planet.

Horsley led a similar expedition in Mount Nyiragongo, in the Democratic Republic of Congo, helping climbers to camp for several nights on the edge of the crater enclosing one of the largest lava lakes in the world.

If you want to learn more about Christopher Horsley, visit www.christopherhorsley.com