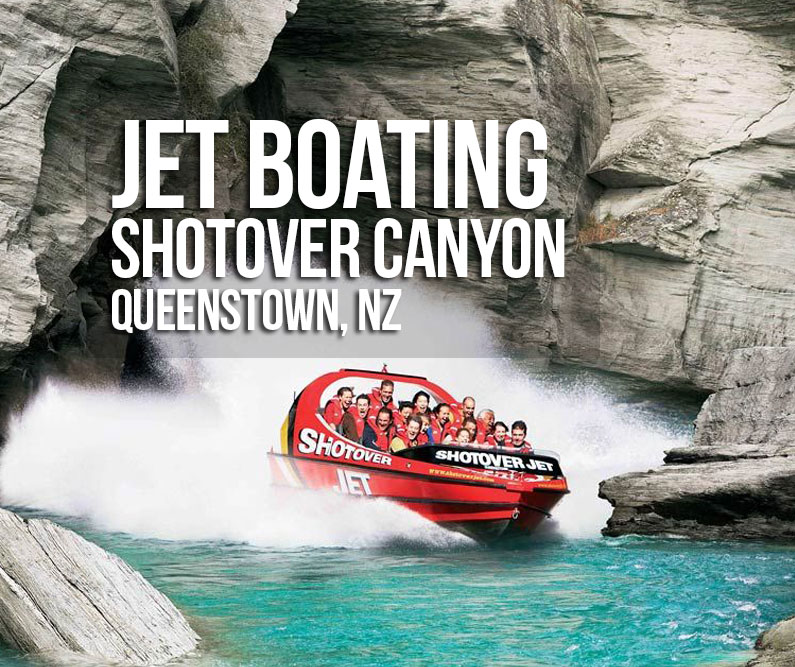 Our recent trip to Queenstown in the South Island offered one of the highlights of our tour of New Zealand.

With the area becoming the world’s ‘go-to’ destination for adventure sports, the Shotover Canyon is attracting adrenaline junkies from all over.

We were no different! 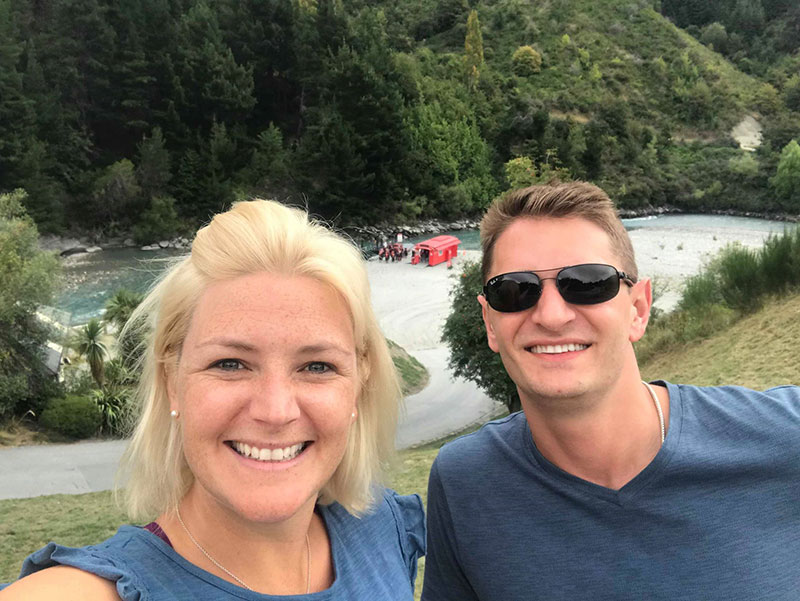 Jet-boating has become synonymous with the best Queenstown has to offer, and it’s not hard to see why!

Billed as ‘the ultimate in water sports excitement’, jet boating on the river started in 1965. They remain the only company permitted to operate in these spectacular canyons.

Ownership has changed hands a few times, but the thrills have remained. 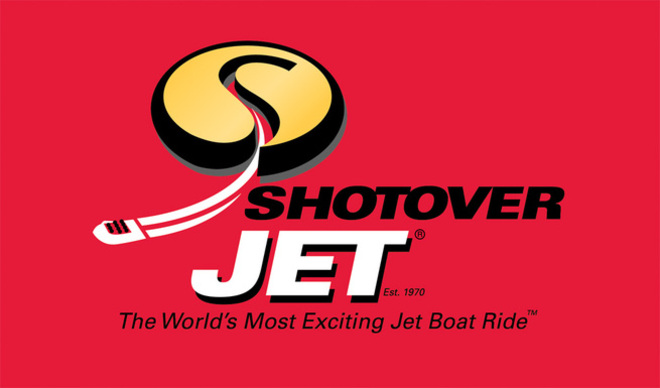 The ‘Big Red’ boats have been specifically designed for use on this river, with a shallow hull and a short nose.

They are powered by twin 350 Mercruiser V8 engines, producing a combined 700 horsepower.

Water is drawn in through two intakes at the bottom of the boat, two jet units containing internal propellers then compress and drive the water out through two jet nozzles at the rear, at nearly 400 litres of water per second per jet unit.

Braking and reversing uses deflectors and thrust buckets, similar to a jet aircraft. 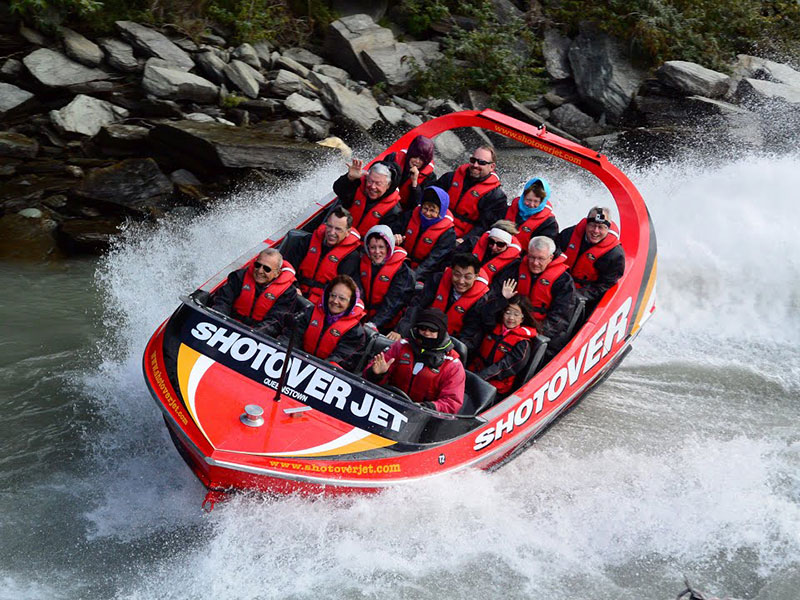 You speed across the water, sometimes only 10cm deep, doing 360-degree spins as you race up the spectacular Shotover River.

With jaw-dropping scenery through the narrow canyons, what’s not to like?

There’s been some famous guests over the years, which is never a bad sign! 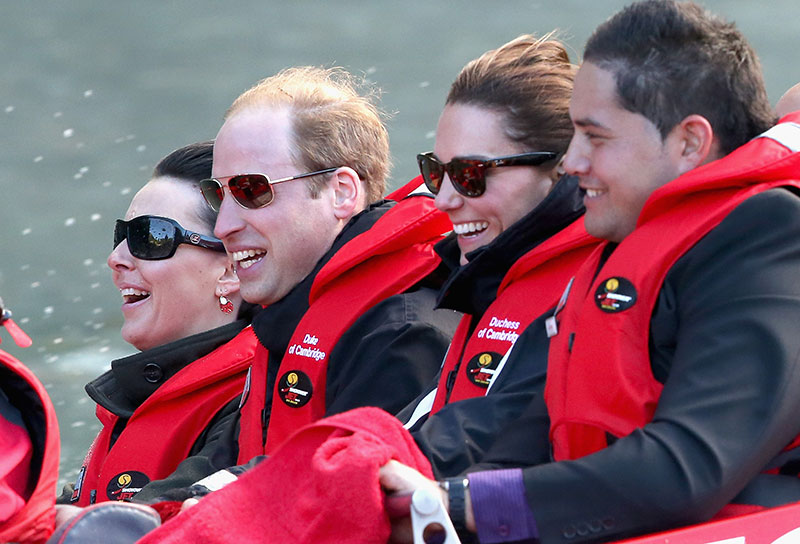 The feedback from other guests is pretty encouraging too.

Can I do this everyday?! What a blast! Best crew ever! #traveltuesday #shotoverjet pic.twitter.com/zRs5ArqTHq

As you head down from the office, you get to see some of the boats heading past.

This really whets the appetite as you await your scheduled departure time.

Once you’re on-board, you get a safety brief.

Essentially, you need to hold on.

When you get going, it feels like a theme park roller-coaster ride, but with an actual sensation of risk.

You’re at the mercy of the skill of your driver, as you race up through the narrow canyon.

Skimming close to protruding rocks, and taking corners so close, you feel it’s bound to run aground!

But really you know the guys have done this journey a thousand times before, and they know every turn like the back of their hand!

Check out the full video of our ride:

Being honest, we enjoyed the Shotover Canyon Jet Boating, more than any other activity in New Zealand.

It’s a unique thrill and one which will live long in our memories.

If you’re going to be in Queenstown, it’s definitely worth checking out.

We did a combo deal to include Rafting and Jet Boating, which is a good way to save money!

You’re not allowed to bring your camera, as it’s likely to go overboard very quickly! (a head-mounted GoPro is the only option).

With speeds up to 85 km/h it can get pretty cold on the jet boat. Wear warm clothes, a jacket and gloves.

The staff recommend wearing sunglasses or glasses as well, because of the wind.

Best Airbed for the UK in 2020 (January Update)
It’s a matter of convenience. A bed is one of the

Best Airbed for the UK in 2020 (January Update) Best Airbed for Home Use Sable Inflatable Bed Air Mattress with Built-in Electric Pump It’s a matter of convenience. A bed is one of the largest pieces of furniture in your home, and when you need an extra one only once in a while, an airbed is a great way to have your cake and eat

Best Pop-Up Tents for the UK in 2020 (January Update) Khyam Highlander Combining an impressive rain resistance, a clever wind responsive design and Khyam's famed Quick Erect System, Highlander will do more than just cater to the needs of three campers. Pop-up tents were initially designed for cars and were notorious for their rather

Best DSLR Cameras for the UK in 2020 (January Update) Nikon D7500 The Nikon D7500 is an excellent camera, with lots of great features, all for a great price. If you’re thinking about buying a new DSLR camera, it makes sense to do a little research. DSLR or Digital Single Lens Reflex cameras have been around for a long time, yet they