Sailing for survival: the incredible tale of how one woman overcame the elements 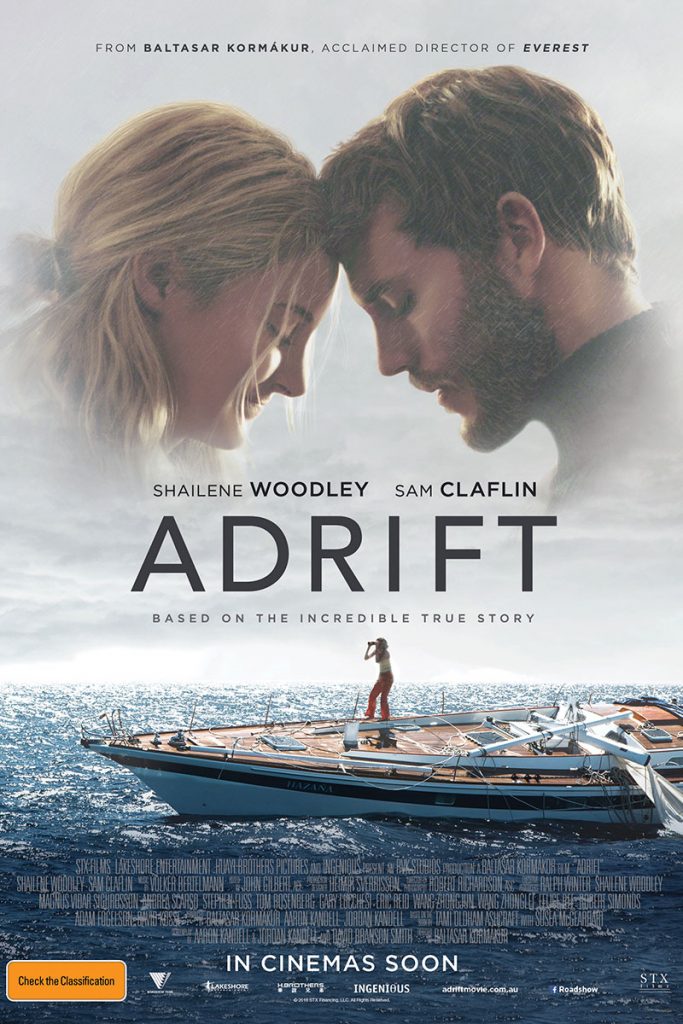 Adrift will be the new film adaptation of how one woman survived 41 days adrift in the mighty Pacific Ocean.

One of the greatest sailing survival stories is about to be released as a major Hollywood Blockbuster, and it’s a stark reminder of what can happen at sea.

A seemingly simple adventure turned into an epic tale of man versus nature as one gilded couple that were asked to sail a 44-foot yacht across the Pacific ended up suffering at the hands of Hurricane Raymond.

The young couple had already covered more than 50,000 miles of ocean sailing together in recent years and so the prospect of covering a mere 4,000 miles together over the course of three weeks hardly seemed daunting. The well-heeled yacht owners asked the pair to take the 44-foot luxury yacht from Tahiti to her winter berth in San Diego, California.

For two avid young sailors, it was a fantastic opportunity, not to be missed.

However, this normally pleasant sail put Tamil Oldham Ashcraft and her British fiancé, Richard Sharp, into the direct path of one of the most destructive storms in recorded history.

In September 1983, the two young sailors set off on what should have been a routine delivery for the Hazana’s British owners. Richard, 34, and Tami, 22, both had extensive sailing experience and had spent more than 18 months together on the Pacific, delivering and repairing yachts. However, just two weeks away was tropical storm Raymond, which maintained hurricane force intensity for two catastrophic days, bringing with it winds in excess of 140 knots and towering 40-foot waves.

Richard saw a mammoth wave rolling in and ordered Tami below deck, as he secured himself with a safety harness and prepared to try and keep the Hazana afloat. She heard shouts from above but was then thrust into darkness as the boat was flipped end over end and she was knocked unconscious. Over 24 hours later she regained consciousness to scenes of utter devastation – a flooded cabin, damaged equipment, an injured head and no sign of Richard. Running out onto the deck the eerie silence and chaos continued, with broken masts, waterlogged sails and Richard’s safety line dangling in the water but her fiancé was gone and the waters around her were empty.

Tami was left alone on the devastated craft, with a shredded sail and flooder lower deck.

Paralysed with grief and shock, struggling to embrace the truth and gravity of what had happened, and drifting in and out of consciousness due to a serious head injury, Tami was catatonic, unable to eat and contemplated throwing herself overboard. But just when it seemed like there was no light at the end of the tunnel and no way out of her predicament, a voice in her head demanded she bail out the boat to prevent it from sinking.

Over the 40 days that followed, an incredible tale of courage and redemption unfolded as 23-year-old Tami overcame her fears and heartbreak. Despite a crippled vessel filled with smashed and soaked equipment, she came back from the brink, navigating with just a sextant and the stars overhead.

Tami believes it was the guiding spirit and insistent voice of her dead fiancé that drove her onwards and inspired her to not give up.

Wondering if it was related to her head injury, the voice confused Tami and at first she tried to ignore it, before eventually following through. Sometimes coming in the form of Richard’s voice, sometimes her own and sometimes her family’s, it told her to find food and take action. Not long after, she began taking the steps that would ultimately lead to her survival. 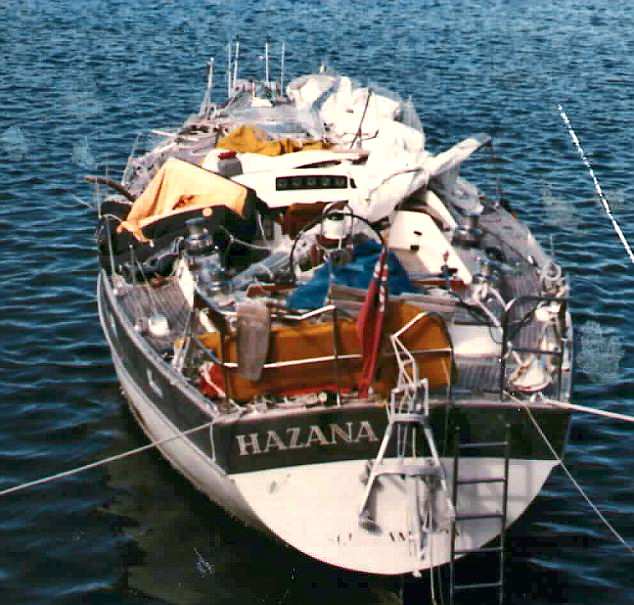 Tami found the boat’s tinned rations and figured out that she could sustain herself for 40 days, and exuded extreme self discipline in preserving her water supplies, taking just a few sips a day. From then on she focussed on creating a sail from a spare sheet and broken pole, allowing her to make a 45 square foot sail that would be just big enough to keep her moving. By day nine, she was able to sail and steer the boat and was making good progress back towards land – although she had no way of telling exactly how far away she was at any given point.

Without any electronic navigation, Tami had to use an old-fashioned sextant, waterlogged charts and the sun and stars to help her make a beeline for Hawaii. Over the course of her sail, the wind and rain returned to punish the boat and overwhelm the exhausted sailor, but the forceful voice in her head kept her going, saying ‘Fight for your life.’

On day 16 and day 34 ships appeared on the horizon, offering a glimmer of hope, but seemed to not notice the flares she let off or the red T-shirt tied to an oar being waved frantically. In a similar misfortune, two planes flew overhead but she was not spotted.

At one point she believed she may have overshot Hawaii and would now be drifting towards China, which would mean that her food and water supplies would not last until she reached land. Between these thoughts, and her maddening solitude, Tami pondered whether perhaps she was already dead or perhaps was invisible and thus would never be found. This drove her to loading a rifle and putting the muzzle to her head, but luckily she never pulled the trigger as shortly afterwards, on the fortieth day, Hawaii’s Hilo Harbour came into view.

Night was falling and she couldn’t risk crossing the perilous coral reef in the dark so had to spend one final agonising evening adrift. However this gave her some final moments to contemplate what she had overcome and the journey she had endured alone. This was also the final time she ever heard the voice of her inner spirit and saviour, who told her that she should feel joy and pride before concluding: ‘I will always be with you’.

The following morning a rescue vessel came out to escort her safely to shore where she would start her long and emotionally traumatic recovering. Whilst in survival mode her grief was suppressed, but on returning to the US and being reunited with her family, the grief intensified and everything she saw or did reminded her of Richard. Needless to say it took a long time for her to build up the courage to sail again and the mental scars are likely to be long-lasting, with Tami saying she hugely regrets not seeking counselling or professional guidance for her loss.

The extent of her head injury meant that she was not capable of reading a book for almost six years, but she made steady progress and eventually came through the trauma stronger than ever, marrying, having children and writing her memoir ‘Red Sky in Mourning’. 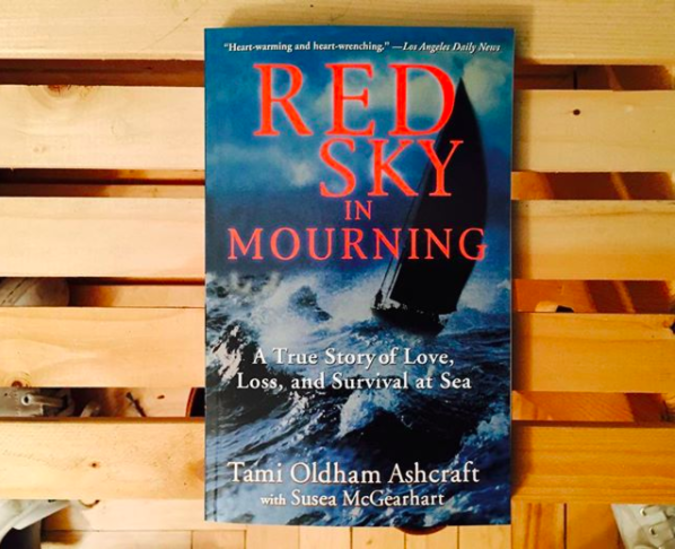 One particularly pertinent quote stands out for Tami – ‘As dawn breaks and the rescue ship is steaming towards me, I know my incredible journey against all the odds had surely taught me one thing. Even in our darkest hours, even in the wilderness, truly, we are never alone.’

Now her ordeal and seemingly impossible survival story will be brought to the screen in a big-budget Hollywood film, Adrift, featuring Sam Claflin as Richard and Shailene Woodley (from The Fault in Our Stars) as Tami.

Whether the film will live up to the real-life drama of the 1,500-mile solo epic that Tami endured and later documented in her book Red Sky In Mourning: A True Story of Love, Loss And Survival At Sea remains to be seen, but you can decide for yourself as it is released later this month.