How Do You Test Superglue? Glue Your Feet to a Hot Air Balloon!

Dmitriy Demin, a TV show producer from Russia, added new meaning to the word ‘trust’, by willingly gluing his feet under a hot air balloon and flying at an altitude of almost 5,000 feet, in an effort to prove the glue’s effectiveness!

While this peculiar test actually took place way back in 2015, for some reason, it has recently gained renewed publicity on the social media.

Demin presents a popular TV show Chudo Tehniki (meaning Wonders of Technology) and is generally known for his creative ideas and clever ways of demonstrating a point.

When the manufacturer of an advanced super glue made some pretty remarkable claims about its adhesiveness and tenacity, Denim thought it a good idea to test their accuracy with a very different sort of test! 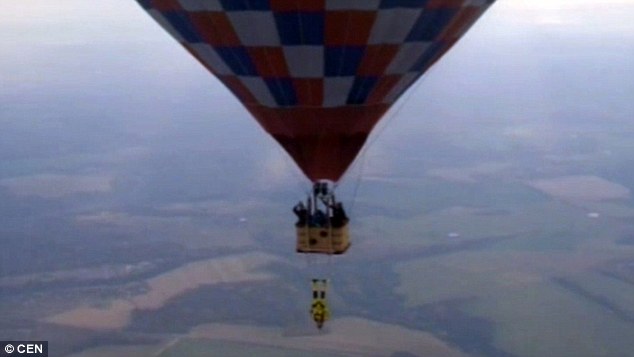 Superglue testing had often been the theme of similar TV shows, using all sorts of heavy objects including cars, caravans, trucks and even caterpillar diggers!

Denim’s producers strived to find an even more impressive way to demonstrate the glue’s qualities and finally came up with a ground-breaking idea; glue a person’s feet under a flying object!

They were betting that that the drama of the whole stunt and the fact that a person would willingly put his life in danger just to prove the quality of a product would attract viewers and stir enthusiasm.

And here we are writing about it.

The production team did everything within their power to ensure his safety, regardless of the glue’s actual performance.

Demin is a seasoned parachutist and would, obviously, be equipped with a parachute.

A parachute needs several seconds to fully unfold and hold a man’s weight, so Denim would be able to hang from the bottom of the hot air balloon only after reaching an agreed altitude.

The only way to do that was to glue his feet on a platform, which would then be attached to the balloon, instead of gluing himself directly to the balloon’s basket. 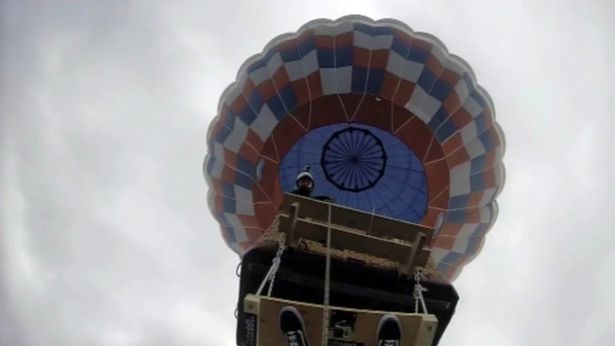 Denim’s shoes and laces were also capable of holding out his weight.

They opted for a light yet sturdy pair of trainers that would hold the feet tightly at both the ankles and insteps.

In the name of entertainment, they did not reveal that they had first tested the glue on rubber tyres and plastics, until after the successful conclusion of the stunt!

The hot air balloon rose smoothly above the ground and quickly reached the set altitude for Denim’s exit.

With the plank firmly attached to his feet, Denim confidently stepped out of the basket and lowered himself down.

A few minutes later, the test was considered a success and Denim  swiftly undid his shoelaces and let himself free.

He then opened his parachute and made it safely to the ground, landing on a farm outside Moscow.

While many criticised Denim and the TV show producers for going too far with their tests and publicity hunt, Denim and his crew said they had a great time preparing and executing this unusual stunt.