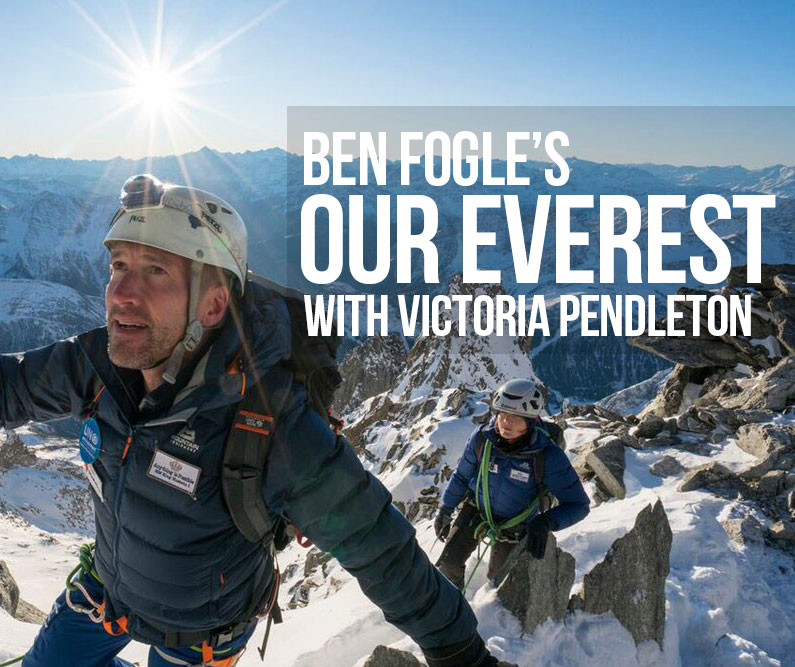 Their attempt to summit the tallest mountain in the world, Mount Everest (8,848m), in aid of the British Heart Foundation has been filmed as part of an ITV documentary named Our Everest.

Weeks of training and acclimatisation; as well as treks to various heights on Everest, have been required in preparation for the climb during Everest’s ‘sweet spot’ in May, which is the safest time to attempt a summit.

In the documentary, viewers will see Pendleton’s attempt take a life-threatening turn for the worst.

The three made several rotations on the mountain, including up to Camp Three, but it was Camp Two (6,400m), at which Pendleton’s health dramatically deteriorated and she started to suffer the effects of hypoxia.

With her oxygen count measuring 21%, where most would record 99-100%, she was advised by medical professionals to abandon the climb. She was put onto oxygen and dextamenthadone to prevent High Altitude Pulmonary Edema.

“Sometimes things don’t go according to plan. Expedition life is about expecting the unexpected. Be prepared for anything. But sometimes it catches you off guard. Climbing Mount Everest is like a game of chess. It keeps you on your toes. It is fraught with risk and in some ways that is why we are here.”

“Our first ‘rotation’ onto the mountain was successful in part, but Victoria Pendleton struggled with the altitude. While she was physically strong, physiologically she struggled to cope with the thin air. Her oxygen saturation was worryingly low. At sea level, most of us would record a healthy 99-100%, anything lower than 95% and you’d probably find yourself in casualty. Victoria registered 21%. That’s nearly dead.”

“It was pretty scary for all of us to say the least. Together Vic and I have climbed peaks around the world in preparation for our Everest summit, and while Victoria has struggled to adapt with the altitude, she has soldiered on. She has been such an inspiration.”Ben Fogle

Fogle had to push on in order to complete this incredible climb, and whilst ultimately successful, it was not without its challenges!

He revealed details of how his oxygen tank exploded while he was in the death zone.

The only blight on the Everest expedition has been a major problem with the Oxygen delivery system. At 8000m plus most people need supplemental oxygen in the thin air. At 8100m, just north of the Balcony, mine exploded. Luckily for me Ming Dorjee Sherpa was able to give me his mask, regulator and cylinder and he returned to the South Col without O2. Then our cameraman’s regulator burst at 8500m and this time Ang Thindu (in tears) volunteered his bottle and regulator. As if that wasn’t bad enough, at 8800m, at a life threatening height, My second regulator exploded on my back. To say it was terrifying is an understatement. My heart sank. If I was scuba diving I would have been dead. Luckily, the heroics of @kentoncool, meant that he gave me his only cylinder and mask. Kenton was able to descend to the South Col for an emergency mask. In total we lost 4 regulators and we met many other teams forced to abandon their attempts due to the problem. It seems to be a major issue on Everest his year and I hope we get to the bottom of the problem before someone loses their life. I’d like to publicly thank the selfless heroics of Ang Thindu Sherpa and Ming Dorjee Sherpa. #everest2018

“At 8,000m plus, most people need supplemental oxygen in the thin air. At 8,100m, just north of the Balcony, mine exploded. Luckily for me, Ming Dorjee Sherpa was able to give me his mask, regulator and cylinder and he returned to the South Col without O2.”Ben Fogle

At 8,800m, at a life threatening height, his second regulator exploded on his back.

“To say it was terrifying is an understatement. My heart sank. If I was scuba diving I would have been dead. Luckily, the heroics of @kentoncool, meant that he gave me his only cylinder and mask. Kenton was able to descend to the South Col for an emergency mask.”Ben Fogle

Since this time, it has been revealed that a defective batch of oxygen bottle regulators was released, which affected the summits attempts of a number of teams.

A thank you to YOU ALL from the summit of the world @britishredcross @anythingispossible.world @unenvironment

Ben Fogle recounts his journey to the top of Everest in his new book, due for release on the 18th October.

Will you be watching Our Everest tonight? Let us know.