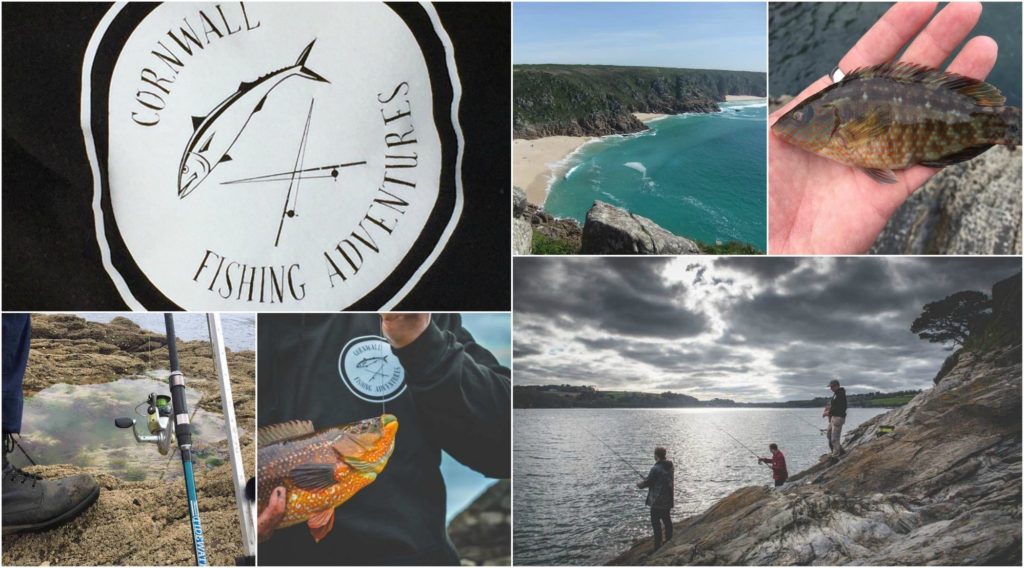 Planning a wedding is hard work; planning a wedding 200 miles away from where you live is harder still. So when TOAD asked me if I would like to go and check out Cornwall Fishing Adventures less than a week before the big day, I wasn’t entirely convinced. However, I’m not the best at saying ‘No’ – which is how I got myself into both situations!

Having been down in Cornwall for the weekend, (finalising the last few bits for the wedding) driving further southwest (and further away from home) on a Sunday evening wasn’t high on my priority list. Doing so in the pursuit of a sport that I have never followed, participated in or really had any interest in, did it no favours either. But, having spent the weekend frantically trying to converse with Justin (one of Cornwall Fishing Adventures’ head-honchos) through signal dead-zones and a total lack of the internet, I felt it only fair that I give it (and him) a chance.

At mid-afternoon on a blustery Cornish day, at their base of operations in a small village near Falmouth, I finally met Justin. Instantly I liked the man – a typically (for the region) laid-back dude, with the sort of tan and sea-tussled hair that you only get from spending far too many hours avoiding work on the coast. ‘Jealousy’ mode engaged!

Introductions made, I explained that I was short on time, (due to a 5hr drive home, potential Glasto traffic, and the spectre of a 5:50am work wake-up call the following day looming over me) so I’d take my own car and follow him to the designated spot.

After a short drive we pulled up at the pre-arranged meeting place for the day – Flushing Sailing Club. Whilst we waited for the rest of the group to arrive, Justin and I had time to get to know each other a bit better and to talk a little about what we would be up to over the rest of the afternoon. As it happens, we didn’t get too far into the second part of the conversation; instead getting stuck into tales of festivals, parties, weddings (inevitably) and their common denominator: beer! 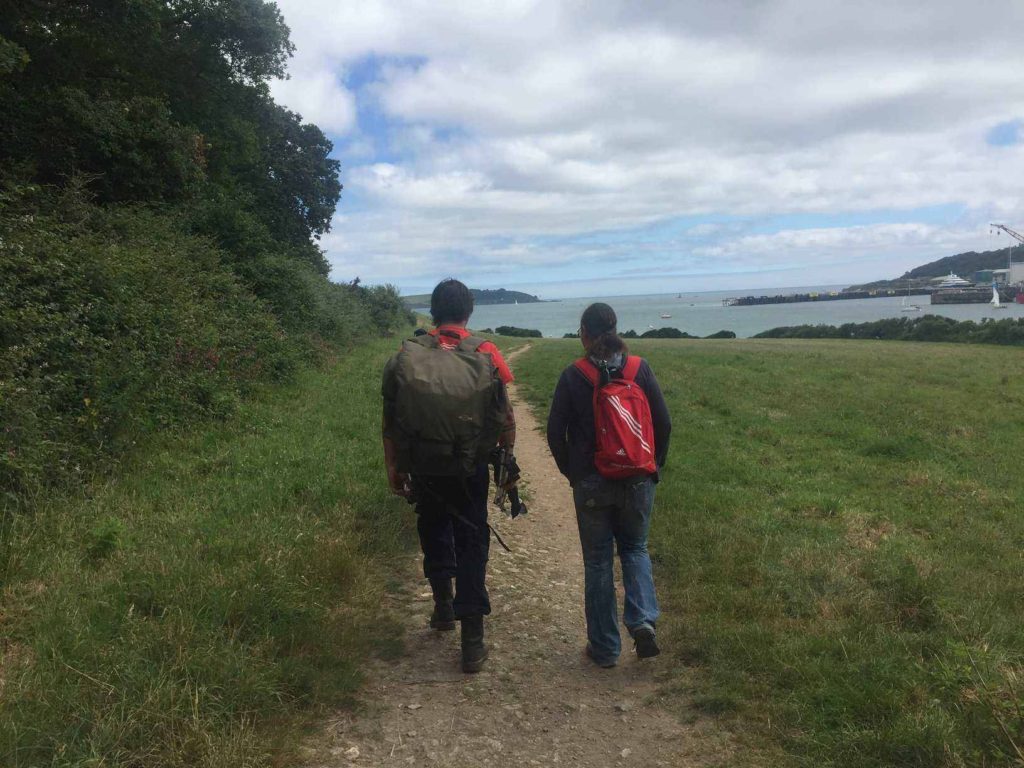 When the others arrived 5-10 minutes later, it was time for us to continue our travels on foot and for me to (finally) find out some more about what we were embarking on.

Returning customers of Justin’s, Faye and Adrian were once again immediately likeable and extremely easy to get chatting to. Having only recently moved down to the Cornish coast from a previously busy city life, they felt they needed to embrace the area, the people and its traditional pastimes, so they got in contact with the Cornwall Fishing Adventures team and got hooked (ahem…) from there. Since their first outing with Justin, he has helped with choosing and supplying suitable fishing gear for them and they now meet on a regular basis; both to get further advice and mentoring, and on a social level – a cheeky beer is never too far away with this lot!

As we walked, Justin explained that we were heading to a spot slightly further around the headland; sheltered from the (not insubstantial) wind and a favorite of local anglers. The journey to the location is as much a part of the experience as the fishing for these guys – they want you to see and feel the coutryside the same way they do; taking in more of the beauty and atmosphere of the area than your everyday harbour crab-liner.

“See that lighthouse over there?” our guide asked as we rounded a corner, “That’s the lighthouse from Fraggle Rock”. Local knowledge, see.

The walk itself was (like the company) easy-going and served its purpose perfectly. Apart from mid-80’s cult-TV landmarks, the route also provided fantastic views of Falmouth harbour and superyacht builders Pendennis’ shipyard – itself worthy of the effort.

“Just through here” Justin called back as he disappeared through a small opening in a bush, just off the path we had been happily meandering along. A short scramble later and we found ourselves on a stretch of coastal rock lifted directly from Mordor: dark grey, spikey, unforgiving and no-doubt the home of many a Cornish goblin.

Having spent a large chunk of my life exploring the Pembrokeshire coastline and its many caves and cliffs, (and being more than a little Orcish!) I was instantly at home. Shoes and socks off I very quickly set about doing my best Gollum impression; jumping around the jutting shards of ancient and sea-battered rock, hunting for ‘fishes, preciousss’.

Whilst I was happily preoccupied and out of their hair, the others set about getting their gear together; finding an ideal spot away from the other small groups of anglers that stretched along the coast.

As I mentioned right at the top, I am by no means a fisherman. With that in mind, please forgive my lack of detail, technicality or finesse over the course of the next few paragraphs!

I took two things from the rest of the afternoon:
1) Fishermen like their gear! I’m a mountain biker and I know a thing or two about having shiny things; it would seem that this fishing game is no different!
2) Justin knows what he is doing with it, and more importantly doesn’t mind sharing his wealth of knowledge on the subject.

Faye and Adrian were both using completely different systems and techniques, but Justin was quite happy to spend as much time as necessary in helping them both get the best out of their equipment, and hopefully catch some fish! He was also more than happy leaving yours truly in charge of his own rig – generous, brave, daft or hopeful? I’m not quite sure if I’m honest, but no harm was done and I appreciated the gesture and the opportunity.

Unfortunately my time was running out and annoyingly the sea dwellers just weren’t biting. Not to worry though as our man had a little trick up his sleeve that would guarantee me going home with at least a small trophy photo, and the chance to weave my own yarn about ‘the one that DIDN’T get away’!

Over we went to a small cut-in in the rock; just two guys, a basic pole and some ragworm (gross FYI!) for bait. 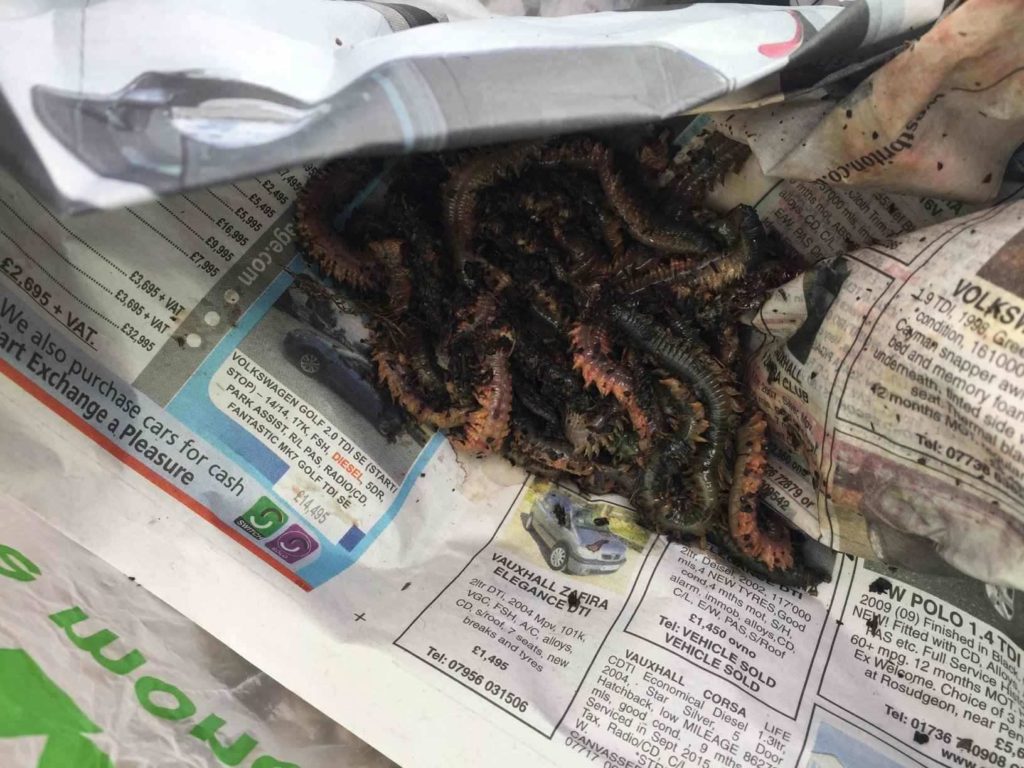 He gave me the reins almost immediately and told me to drop the line straight down into the deep area below us….’ploop’…. A few seconds later, “Feel that little twitch on the line? Reel it in slowly and see what we’ve got.” Score!

My first legit catch…well, sort of legit….it was alive, and it was wild, so I’m counting it! I’m told it was a Wrasse and they love little areas like the one we were in, which is why Justin was so confident that I’d go home with something to my name.

20 minutes later and I had a whole bunch of Wrasse in my metaphorical trophy cabinet, (we set them all free once I’d brought them up; battered and bruised for sure, but alive and swimming) but I was also about to run into the sort of overtime where your future wife and mother-in-law become seriously unimpressed with your time keeping.

Fond farewells said and absolutely genuine gratitude given, I made my way back to the sailing club, leaving the others to hopefully fare a little better in my absence.

I’m still not likely to go out and spend my hard-earned on a bunch more shiny stuff I don’t know how to use properly, but I can honestly say that I would (and will) happily get in contact with the boys at Cornwall Fishing Adventures when I’m next in their neck of the woods, and I’ve already suggested that some of my more time rich and outdoorsy friends do the same.
If any of that sounds like you, well, you should do too!