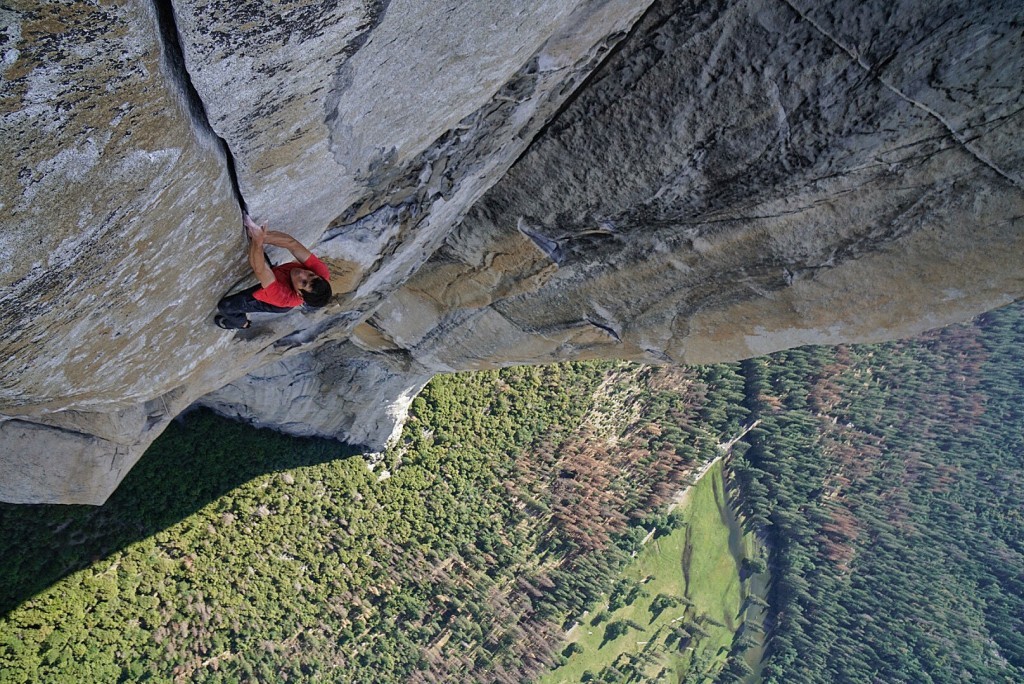 To those of you who know nothing about Yosemite’s El Capitan, this news may not seem so impressive.

However, anyone who knows something about the place, or –better yet- has climbed it, ascending to Yosemite’s El Capitan top without the use of ropes or any other kind of climbing equipment is nothing less than a Herculean feat.

El Capitan (‘The Captain’ in Spanish) is an impressive vertical rock formation in Yosemite National Park, located in California, U.S.A.

This gigantic granite monolith boasts a height of almost 900 metres above ground and is considered one of the world’s most popular yet challenging sites for experienced and skilled rock climbers.

Another way to see it and understand what climbing this vertical kilometre means, is to understand that it dwarfs the tallest man-made constructions around the globe, including the Burj Khalifa — without mentioning its labyrinth of fissures, crevices, and cracks through which the climbers must find their way.

The imperious El Capitan in Yosemite

The top of this impressive cliff can be reached either by hiking (through the Yosemite Valley, using the trail next to Yosemite Falls and, basically, following the signs to the west), or –for those in love of climbing and adventure- by climbing the face of the Rock.

Climbers have several climbing routes to pick, none of which can be described as easy even with ropes and climbing gear, such as the famed ‘Iron Hawk’ route, or the equally challenging ‘Sea of Dreams’.

Alex Honnold, a highly skilled and experienced climber from Northern California native, has managed – for the first time in known climbing history – to free solo to the top of the Yosemite National Park, without any use of ropes, harnesses or other climbing gear whatsoever.

This ascent was not free climbing, since free climbers use ropes and harnesses to arrest the fall. Honnold did not use any ropes whatsoever, making his climb a death-defying venture!

An achievement that is highly risky, extremely difficult and, obviously, very impressive.

Alex Honnold in training for the climb

Only a highly devoted and talented climber could succeed such an exploit – and that is certainly true for Honnold since he dropped out of UC Berkeley to pursue his dreams and climb the world’s tallest peaks.

Using nothing more than his skilled hands and seasoned feet, this young (31 years old) yet talented climbing veteran (he already boasts 20 years of climbing experience) managed to reach the top in less than 4 hours!

I got really excited about the idea, but I’d look at how tall El Cap is and think, “Oh… hell, no.” I only really started to plan the climb about a year-and-a-half ago.Alex Hannold

Conquering this monster is not something you thing about on Monday and get it done by Tuesday.

Honnold devoted the last 2 years in meticulous and arduous preparations, including improving his flexibility, agility, physical strength, taking his weight at proper levels, boosting his stamina and ameliorating his moves and grips.

Still, the most important part of his preparations was studying the ‘enemy’.

Yosemite’s El Capitan is not willing to surrender so easily, and uses its bold angles, tricky spots, and crumbly grasps to dishearten ambitious rivals.

After carefully pondering his options and available routes, Honnold chose the ‘Freerider’ route, leading to the top through the west side of the face.

This particular route involves 30 different pitches, or – for those of you who are new to the sport – climbing sections.

The Ascend gets really difficult as the climber approached the 700 metres, since the holds of the route are so small they can only be gripped with the climber’s thumbs!

After selecting his route, Honnold climbed using protective ropes and climbing gear many times before his final ‘free-solo’ attempt, thus planning and rehearsing in advance all moves and grips, all hand and feet positions, and every finger-hold.

After making sure he had identified the best holds, he marked them with chalk to remind him of his mental map and ascent plan.

Next, he devoted endless hours training and strengthening those parts of his body he would need most, especially his fingertips, and performed innumerable one- and two-armed pull ups. By keeping a thorough record of his painstaking training sessions, he managed to optimise his skills and moves.

The Breach of the Walls

Eventually, Honnold scheduled his final storm on these rocky walls.

As Honnold himself admitted, that day the Rock was as imposing and awe-inspiring as ever, yet he did not find it intimidating since his determination, and hard work helped him overcome his fears.

Honnold said afterwards that having no gear at all made him feel more light, energetic and agile, making the whole experience simply amazing.

It’s fair to say that climbing Yosemite’s El Capitan would require the use of at least 60 meters of rope and other heavy gear, so the perception of lightness is accurate!

I imagined myself being on a victory lap, like I was taking an extra lap around a running track or something. I had to still focus and make sure I didn’t slip off, but I just kept thinking, “This is so, so awesome, I am cruising, this feels amazing,”Alex Hannold describes the last few hundred meters of the climb

After concluding his climb, Honnold enthusiasm was hard to describe.

Congratulations and commendations came pouring in from all over the world from fellow climbing enthusiasts, friends, and relatives.

While many of them called him a ‘freak”, everyone acknowledged his undeniable skills and ironclad devotion to his favourite sport.

Honnold himself said he realised a dream that has been haunting him for years, but he does not intend on resting on his laurels.

Find climbing locations in the UK