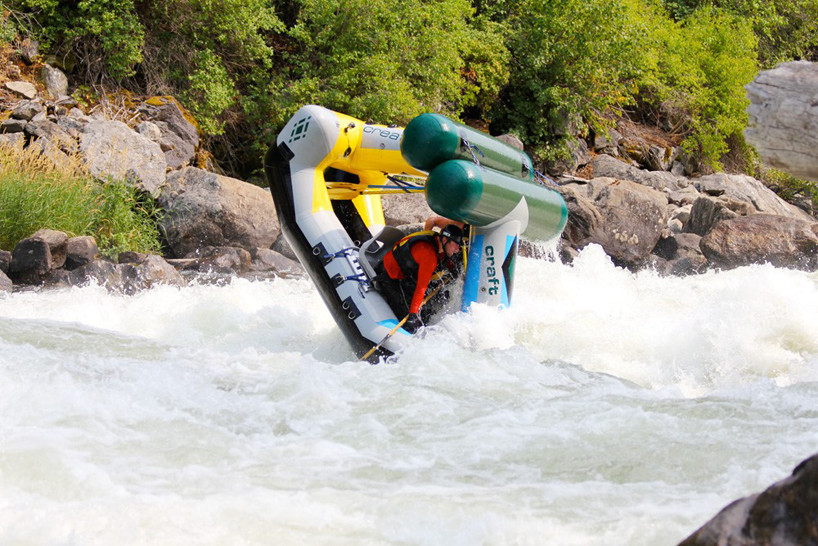 With white water rafting growing in popularity and offering participants a thrill ride which is hard to match, inventor Darren Vancil has come up with a fantastic alternative to rafting.

In conventional rafting the raft can go completely upside down with all passengers falling out. This then requires the effort of re-flipping, which is impossible in faster sections of the river.

The native of the Colorado river has given enthusiasts like himself the chance to take the sport to a new level by venturing into white-waters riders would normally have to avoid.

It was invented in 1997 so it’s hardly new…when Darren was inspired to find an alternative after his raft dangerously flipped during Colorado’s Gore Canyon Race, which resulted in a dislocated shoulder and a very uncomfortable swim.

Speaking of what the craft offers on more rough sections of the river, he mentions, “This river is not possible to swim, and the only reason we can run it is because we’re in a craft that we’re not going to swim out of”.

The triangular inflatable shape of the Creature Craft offers an inflatable anti-roll cage to prevent its passengers from flipping over in rapid rivers. Riders are strapped into their seats with an easy-release belt.

Levels and currents have little or no effect on the boat due to the rolling technique it employs.

Riders can have fun and stay safe

“Even in much more moderate water you can play and surf and drive into the big holes and just be safe,” said Vancil. “We’re getting more and more respect as we go around the world and run these huge rivers”.

The rafts are also increasingly being used for river safety boats, allowing rescuers to reach riders in more dangerous situations.

It’s a great way to have fun and stay safe on the water. It’s been a slow-burner since 1997 but hope to see more of them in the UK soon.

Check out their promo video to learn more about them.

One of the best is Lee Valley White Water, the site for the 2012 London Games.