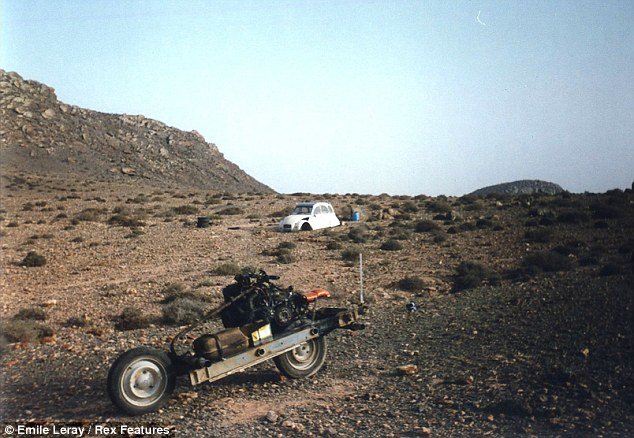 How did a French electrician manage to get back to civilisation after being stranded in the middle of nowhere; using parts of his broken Citroen 2CV to make a makeshift motorbike?

When Emile Leray, an electrician in his 40’s from France, decided to leave the city of Tan Tan back in 1993 and cross the wild yet captivating Moroccan desert with his car, a hard-boiled Citroen 2CV, he guessed some minor issues could come up. He certainly did not expect the ordeal that was about to endure.

Leray was a seasoned traveller who had already explored most of Africa in no less than ten different ventures, who felt confident that he knew this region well.

A question that instantly emerges is why he picked that particular car and not something more… robust, like a 4X4 Jeep specially designed for off-road adventures.

Apparently Citroen’s 2CV was famed for its durability even in extreme terrains and was widely used by many locals on their trips across the desert. In fact, it had gained the nickname in the region of ‘Steel Camel’ since it would go virtually anywhere — on condition that you treated it gently. Leray admitted that this last point escaped his attention.

Starting his drive puffed with excitement and self-assurance, he left Tan Tan, but just a couple of hours later he was forced to stop at a military outpost. There, to his bitter disappointment, he learned he wasn’t allowed to drive any further.

The idea of returning to the city only exacerbated his disappointment, and thus he thought it would be great to go off road and move around the restricted area.

Getting Stuck in the Moroccan Desert

While travelling somewhere in the sun-scorched wilderness, and being no less than 20 miles from the nearest trace of human civilisation, his ‘devoted’ but worn out vehicle quietly reached its death throes: after a few hard bumps from the rocky terrain he lost control and crashed the car into a rock formation.

The crash broke the Citroen’s swing arm and wheel axle in half, putting an end to its off-road exploits.

Such an event would break most men, even those with an adventurous spirit – but Leray’s steely determination and patience carried him through.

He had at his disposal a small set of tools, supplies and water that could sustain him for a couple of weeks and, of course, his wrecked comrade. Knowing that no-one would come to his rescue (since no-one knew where he was), he decided to make the most of what was available and rescue himself.

Emile Leray in the desert

Covering the distance on foot was out of the question, since he felt he did not have the stamina and physical strength to reach the nearest village. So, he put himself, as he eloquently described it, into ‘survival mode.’

After carefully weighing up his options, Leray concluded the best possible course of action was to take off parts from the broken Citroen, put them together and make a new vehicle.

While working mostly as an electrician, Leray knew a lot about machines and how to meddle with them.

Combined with his innate ingenuity and resourcefulness, this knowledge helped him form a mental picture of his improvised contraption. Next, he started pulling off parts and pieces to realise this design.

Naturally, the whole idea had to undergo several adaptations – like using the car’s rear bumper to make a rudimentary seat – but after ten days the main skeleton was ready.

Leray had to shorten the chassis, move the engine and gearbox in the middle and reattach the axles and two wheels.

Life in the Desert

While creating his means of rescue, Leray had also to make sure his provisions would last long enough. He consumed small amounts of food and closely monitored his remaining amount of water, drinking as little as possible. He also took off the car’s exterior and used it as a tent for sleep and rest.

The problem was that his contraption took more days to finish than he thought, making him wonder whether his provisions would prove adequate.

Finally, after 12 days of hard work and severe stress, he completed it – which proved a great relief, since he only had half a litre of water left.

Slowly, he turned the key, and his makeshift bike started moving.

As it turned out, Leray and the remnants of his Steel Camel were too hard to die.

After a day of riding, the Moroccan police spotted him and took him to the nearest village. They even decided to leave him with a heavy fine, since his car registration documents referred to a Citroen 2CV, not to a hand-made chopper!

Still, Leray was happy to come out alive from his ordeal.

Even though his fascinating tale made headlines and also appeared on French television in 1993, it was quickly forgotten, since Leray himself did not reveal the details of his feat.

Now almost 25 years later, his exploits have gone viral after they appeared on a motoring website.

Leray, now aged 62 and residing in France, has kept his self-made motorbike as a reminder of his courage and voracious thirst for adventures and travelling.

Many people, fascinated by his resourcefulness, see in him a personification of Marvel’s fictitious hero Tony Stark, the famed ‘Iron Man,’ who was renowned for his ingenious engineering skills.

Off Road Driving
Off Road Buggies