7 Marathons on 7 Continents in 7 Days

British runner Susannah Gill has stunned the world by attempting one of the most physically and psychologically demanding races in the world, completing seven consecutive marathons in seven days in seven different continents.

Describing her feat as nothing more than the realisation of a “crazy ambition”, Gill had to overcome not just the physical strain of consecutive long-distance races, but also diverse temperatures and climatic conditions.

She completed all seven marathons of the World Marathon Challenge, covering 183 miles in the fastest time ever by a women runner –  24 hours 19 minutes and nine seconds (an average of 3 hours and 28 minutes per marathon).

She smashed the previous record by more than three hours.

Commenting on her amazing achievement, Gill said that she simply couldn’t resist the challenge, but she still cannot believe how she got there. When she first started to run ten years ago, she was only aiming to get in shape and maybe complete the London Marathon!

The World Marathon Challenge is the logistical and physical challenge of running seven consecutive marathons on seven continents in seven days!

Contestants are transported every day to a new location by charter plane and have no more than a few hours to adjust to the new climate, regain strength and start the next race.

The annual ‘777’, as most running buffs call the World Marathon Challenge, was completed for the first time in 2003, by the legend of endurance records Sir Ranulph Fiennes, at the age of 59! 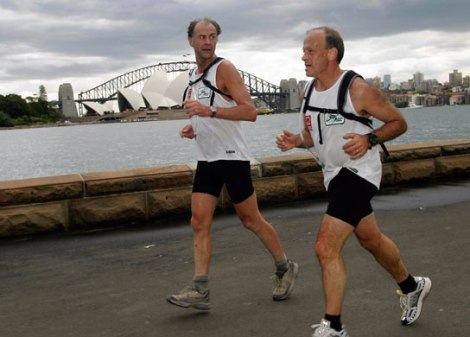 Mike Stroud (right) and Ranulph Fiennes (left) running the third of their seven marathons in seven days in Sydney.

Since then, fewer than 200 people have managed to complete all seven races within the 168 hours of the contest, a telling fact of how difficult the race is, both mentally and physically.

As an acknowledgement to their skill and physical condition, all successful participants are recognised by the Intercontinental Marathon Club, which also provides the definitive list of athletes that have indeed managed to complete the ‘777’.

The Guinness Book of Records also acknowledges the event for record-setting purposes.

The Most Challenging Race Ever

Each year, the date of the challenge is carefully selected, to guarantee the best possible weather conditions for the runners; this, of course, is not easy, and there are always unforeseen issues with the temperatures, humidity and wind for the athletes.

February, is often a popular pick, being neither ideal for a marathon in isolation, nor forbidding for all of them.

The race always starts within the Antarctic Circle and ends in Miami, North America. More specifically, contestants move from Novo in mainland Antarctica to Cape Town in Africa, Perth in Australia, Dubai in Asia, Madrid in Europe, Santiago in South America, and Miami in the US. 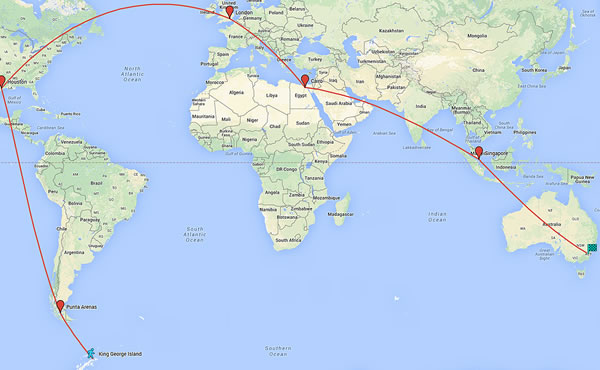 The 777 Marathon Challenge covers a total distance of 55,000km and 68 hours in flying time

As a means to boost competitiveness, organisers have inserted several competition elements throughout the challenge, including the fastest individual race and fastest combined marathon times for men and women.

In total, participants run 183 miles (295 km) and travel 55,000 miles across the globe, spending approximately 68 hours in the air – more than 10 hours per mid-race transport.

Needless to say that World Marathon Challenge organisers warn all athletes interested in taking part to the contest to make sure they are in excellent health and physical condition, and consider all possible risks in advance.

A leading executive in British horse racing, she started running in 2008 with the sole purpose of getting fit and maybe successfully finishing the London Marathon.

Soon, she found running long-distance races addictive, participating in 45 marathons, and steadily upping her performance and improving her times. By February 2019, her fastest time was 2 hours and 58 minutes.

The World Marathon Challenge requires far more intense preparation, due to the physical strain of the consecutive races and the adverse climatic conditions that exert considerable strain on an athlete’s muscular system.

Gill admitted that during the period of preparations for the 777, she became rather antisocial, working out every weekday after work, as well as running at least two marathon-long runs every Saturday and Sunday!

Understandably, friends and family simply didn’t see her a lot in the months before the race.

As soon as the race started, it was obvious that Gill’s intense preparations were paying off.

She made excellent times in the first five marathons. As she later told journalists, she also managed to keep well nourished at a good level, until the fourth race.

Soon after, she felt constant hunger, sometimes even waking up in the night in need of extra calories.

She estimated that she burned as much as 4,000 or even 5,000 calories per day for a whole week! As a result, sleep became a problem during the last three races, since she had to constantly rise from bed and eat.

Gill managed to finish second in the first marathon of the event in Antarctica in 3 hours, 53 minutes and 55 seconds and then win all six remaining marathons, marking a sweeping victory.

Her fastest time was accomplished in the Madrid race, the fifth in line, passing the finish line in 3 hours, 11 minutes and 49 seconds.

Her exceptional feat won her a world record, completing the whole series of races in just 24 hours 19 minutes and nine seconds – three hours faster than the previous record.

From now on, she wants to go back to running one marathon at a time!

Her attempt was in aid of Sports Aid, a fantastic charity helping British athletes with financial support and personal development.

When I took on @WorldMarathon77 I ran in aid of @TeamSportsAid because I simply love what they do.

So many people were kind enough to make a donation and help raise over £19,000 for the charity. A MASSIVE thank you from all of us!! 🙌#Thankyou #Marathon777 #SupportTheNext 👍 pic.twitter.com/De1giBSp6E

Running for Good
Buy from Amazon.co.uk
SaleBestseller No. 2